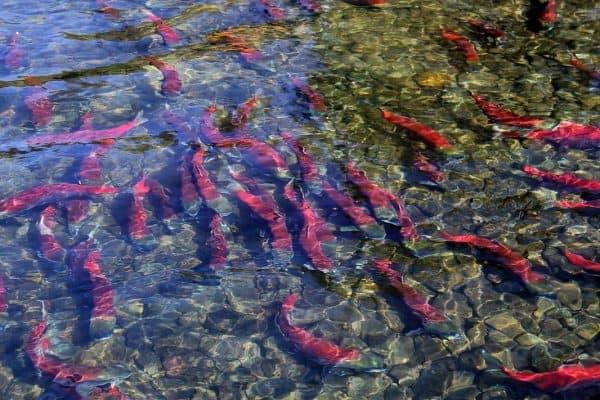 Synopsis: B.C. is home to a group of independent salmon fisheries that are owned and operated by eight First Nations fisheries. To sustainably preserve salmon numbers and to remain competitive with large-scale fisheries, the independent fisheries agreed to form a co-op to streamline their processing and marketing, making it more efficient for everyone.

Each year, wild salmon leave the salt waters of the Pacific Ocean to swim up British Columbia’s freshwater streams and rivers to find a place to lay their eggs. It’s along this journey that most salmon are caught.

Long before B.C.’s salmon industry was born, First Nations across the province were already fishing — and still do today. However, rapid changes to the province’s salmon fishing industry made that way of life less secure.

Independent, First Nation-owned and operated salmon fisheries in B.C. provide jobs and equipment to local fishers, as well as a brand for their Nation. For decades, each company managed its own harvests, processing procedures, marketing tactics and sales. Though successful, this method was expensive and left little room for profit or expansion into new markets or products. The small, independent fisheries were pitted against large, commercial fisheries in the same markets.

The fisheries invited marine biologists to survey the waterways that salmon use each year. The scientists found that fewer and fewer salmon were reaching their spawning locations due to overfishing — the tactics used by larger companies were not sustainable.

This was concerning to eight First Nations that own and operate independent fisheries. The wild salmon provided a way of life now, and an important traditional connection to their culture and pasts. The thinning schools of wild salmon meant livelihoods were on the line, and an important food source was in jeopardy.

The fisheries needed to be competitive while fishing sustainably. After consulting with experts, they realized they would have a better chance of success working together than alone.

This did concern some of the Nation’s leaders, however. Some worried that if they took part in a joint venture, they would eventually amalgamate and lose their individual identities. Others worried the larger of the independent fisheries would have a greater say than the smaller ones. For the collaboration to be successful, the Nations needed to ensure that their own interests would be respected.

Naturally, the solution was to create a co-operative.

The eight fisheries joined together to create River Select, a co-op that handles each fisheries’ marketing, while also overseeing the salmon processing and the distribution of their products. The Nations could focus on fishing, and the co-op finds efficiencies in these other areas. And though the products are collectively branded under the River Select name, each fishery maintains its own brand, and products are traced and identified by their source fishery.

This means each fishery has more money in its pockets to pursue expansions and new products. They can also finance fishing opportunities and related infrastructure costs, that none of the individual co-ops could do alone.

As owning members of the co-operative, the eight First Nations also all have an equal vote in the business’s operations. So, when it comes time to voting on things like what’s considered sustainable fishing, each Nation has a say. It also means that they retain their unique identities and vote in ways that make sense to them.